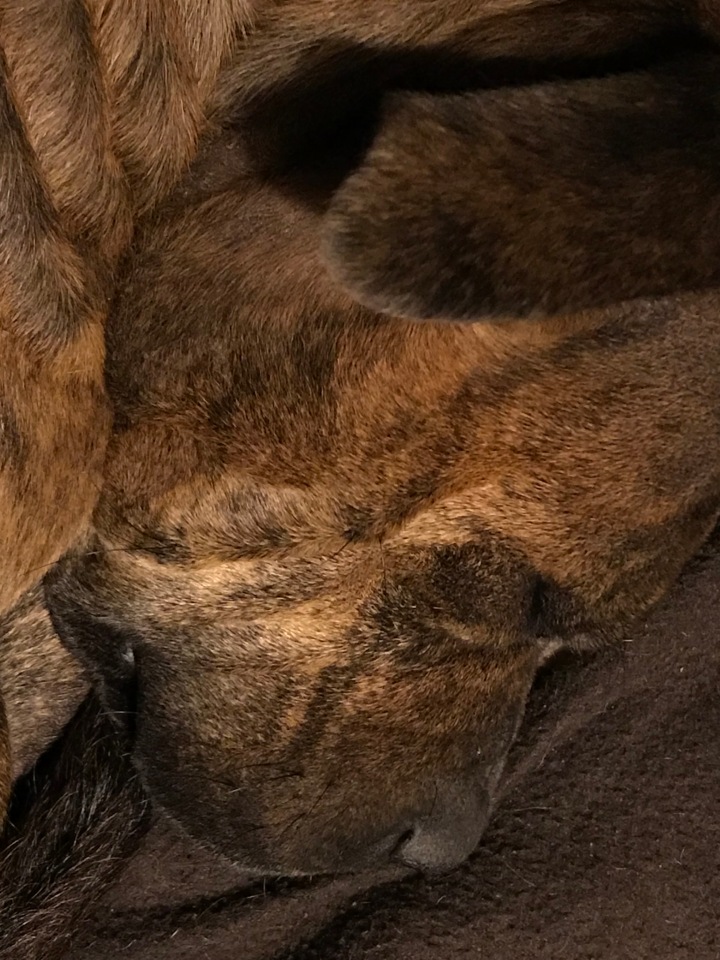 Tyger Linn is not an overly needy dog so I was surprised when she got up on the bed and tucked herself quite neatly against my body with her head under by chin. This is Tyger’s way of letting me know she wants to be held, like a puppy, and even though I want to nap, and it’s going to be hard to get to sleep with Tyger nestled against me like this. There’s some reason inside of this little girl that caused her to come to me wanting comfort. So the nap can wait, and Tyger gets petted on her ears as she dozes in and out of sleep, pushing me with her nose when I stop.

In an alternative universe, Tyger Linn is an only dog with an older person as an owner and I think she would be happier that way. But then again, there is no way of telling what is reality except that one we’re sensing right now, clouded by prejudices and desires, perceived poorly by soft machines that are tragically flawed. One beer more and I might not have cared about the person of a striped persuasion, or perhaps, one less and I would have been more reasonable and not tried to rescue the violent little street dog.

Very few of the dogs I have rescued have been abuse cases, and Tyger arrived in good health, physically, but clearly she was accustomed to fighting for food, space, attention, and for her life. Every disagreement was a fight and every fight was to the end. The reality Tyger Linn lived in there was very little love or affection and no comfort. Sleeping on the bed was something that Tyger delighted in the first time I allowed her. She had to learn not to sleep in the middle, so there would be room for others, and for me, and her was taught not to growl at me, or the other dogs once she was on the bed. But there is something to be said for a bed. It beats the hell out of sleeping on the ground, in the open, or in a cage.

While in reasonably good health, Tyger did arrive with a great deal of food aggression. She ate very quickly, scarfing down mouthfuls of food as quickly as she could, growling at me if I got near, and then she was off to do battle for the food of other dogs. Tyger learned very quickly that no one is allowed to steal here, and no one will ever starve under my roof. It took some doing, but in the end, Tyger learned to sit and wait for her bowl to be filled, and she learned to stay away from other dogs while they eat. Comfort and food go a very long way in getting a dog to settle into a pack. Love helps a lot, too.

When we see this, and if you rescue dogs you do see it, we assume it’s a natural thing. We assume that if we do the right things the right way, no matter how damaged the dog might be, we can pull it back from the edge, and wind up with a mild mannered lap dog. It’s true, it’s possible, and while Tyger is not exactly perfect right now, the little girl has come a very long way. The clashes are less frequent and far less violent now. Tyger isn’t interested in prolonged conflict with anyone for any reason now. She has her bowl and she has her place. And when need arises, Tyger gets to get up on the bed and curl up beside me, and be comforted.

It’s odd. As many people who might applaud this rescue of a street dog destined for the needle, there seems to be a blindness when we speak of rescuing human beings. If you can agree that love and comfort will heal the violent street dog and guide her into being a trusted member of a pack, why is it we jam human beings into cages and expect them to be released in a better form? We cringe at the idea of high kill shelters churning out dead pets as quickly as they can be brought in and put down, yet we have become so accustomed to prisons being the only answer to crime and criminals, that we do not wonder any more that they do more harm than good. If prisons work then why do we keep having so many criminals?

It’s difficult to rehab a dog, especially one who is violent. It’s got to be even harder to rehab a human being. Yet with all the millions we spend, are we actually making things worse? I can point to Tyger Linn and tell you that she is a success story, that people can pet her and hug her, and she’s okay with other dogs, but can you take someone out of prison and feel comfortable letting your kids live next to that person? The perception is there, even if it isn’t true. We do not trust our system of punishment to produce favorable results. We use a system to damage human beings and then we blame them for that damage.

No, I have no answers. I cannot tell you that allowing criminals to sleep on beds and be petted will solve the world’s problems and we’ll all sleep with our doors unlocked. If there was an easy answer here then the world would beat a path to my door and we would all live happily ever after. There is no cure here.

What this is, in the end, is a question. Why can we do no better? Why is it that we have the wherewithal to seek the retraining of dogs in need yet there are over one million of our citizens in prison right now without any hope of doing more than sitting and waiting for their time to be up?

Tyger Linn stirs in her sleep, sighs, and then returns to slumber. This is a damaged being, mistreated by humans, and mistrustful still, at times of their intentions. But it has been worth all that I have done, and it will be worth all I will do.

3 thoughts on “Tyger Linn and Prison”