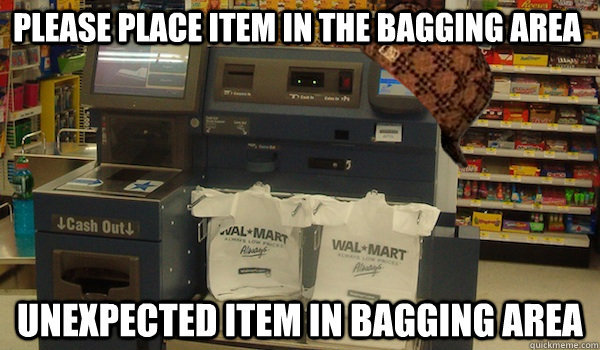 If there is one single benefit of night work it would have to be I can go to one of the few places that are open all night and shop without a crowd of human beings convincing me that a species specific virus with a .0001% survival rate would be the best idea ever. I have never had to fight a crowd an hour before the sun came up and morning people are usually in a hurry, and I am, too. I want to get in and get the hell out, and go home and pet my dogs, and sleep.

I got off early tonight, not even midnight, and I need a few things. I pull into the parking lot and realize the circus has come to town. There are many cars which means even more people. I pull down a row and there’s two guys pushing a cart, in the middle of the row. The fact there is a vehicle behind them doesn’t mean anything. They get their stuff out of the cart and leave it in the middle of the row as they’re loading their car. They move the cart only because they don’t want to back over it. The guy pushes the cart in a random direction and that’s an allegory of his entire existence.

Inside, it’s too crowded for me to be there. But now that I am here, I may as well try to make the best of it. That’s hard to do, really. I’m looking for vitamins, and I stand far enough back to let people pass in front of me. A woman comes and stands right in front of me, and starts talking on her cell phone. I pull out my phone and say very loudly, “You have a great ass” and the woman turns around sharply, but I’m staring off into space and acting like I’m on the phone. She edges away from me, and looks at me as if she thinks there might be more to this than meets the eye. There isn’t. I know women with great asses and she isn’t one of them. Mediocre at best and no body hung on someone that rude looks good. I’m sorry, but you can’t paint roadkill and call it a Picasso.

There has to be someone who is good at math that can explain to me the probability of there being a screaming child in the same building with me, at any given hour, considering the population size of the people inside of the building, and the type of wares being sold inside. I need a cellphone app that I can pull up and check before I go anywhere, and see, mathematically, the odds of a screaming child inside. There is a screaming child. The sound is found in the darkest parts of Hell, and shipped upwards, and then installed in kids who parents who should have never bred in the first place. First, the Zombies.

Zombies are those people in a store who wander aimlessly. They have no direction. They have no shopping list, no mission, no real reason to be there. They go from display to display, fascinated by colors or design, and they’re going to move slowly, and they’re going to push their carts into the high traffic areas. They are the blood clots of human existence. The first video games that were made back in the 1980’s had Non player characters in them the players could speak with for information, but the NPC would sometimes stop in odd places and trap the players or prevent them from moving forward. It was a design flaw, a glitch the game builders didn’t see coming, and if you believe in such things, you have to believe people like this in real life are God’s worst mistakes other Florida Gator fans.

Worse, infinitely worse, are those people who cannot shop alone. They’re as weird as those people who cannot have a bowel movement without an audience. I simply do not understand it., They’ve gathered half their blood relatives, two in laws, three people who live in trailers nearby, a homeless man, and they kidnapped one person simply because he would get lost in the mob, and then they decided to go shopping. It’s like locusts or swarms of gnats. Or the stuff that comes out of overflowing toilets that keeps you out of a public restroom, if the smell didn’t get you first.

And then, the Screamer.

There’s a square. It has an entrance. It has an exit. Inside lies the heart of the problem here; that’s where all the machine that scan items and take money resides. There are two human employees whose job it is to herd shoppers into the square, and to the next available scanner.

How? Hard? Can? This? Possibly? Fucking? Be?

The woman with the screamer stops at the first scanner, and uses her cart to block the entrance. She ignores her wailing child. So perversely has she parked her cart she has to take three steps back to the cart, get an item, take three steps to the scanner, and she’s got one of everything in that damn cart. Finally, one of the cartherds reaches in a pushes the cart closer. The child screams. The woman moves slowly. The child screams.

The woman in front of me is buy camping equipment, including a sleeping bag, for reasons that escape me, she has unrolled in her cart. She’s on the phone and there’s a gap between her and the square’s entrance. Just as I am about to pass her, because clearly she’s uninterested in getting out of the store before dawn, her boyfriend shows up and they move up, and discuss the sleeping bag. It’s South Georgia. It’s eleventy-billion degrees with eighteen hundred thousand million percent humidity, inside an air conditioned building. Buy your camping gear in the native land of where you are going to sleep out, not here. She moves into the square and I hope if they share that sleeping bag in a tent in South Georgia, the offspring of their union of that night has superpowers. They’ve earned it.

There is one scanner different from all the others, it has a piece of paper taped over the scanner. There is a sign that reads “Cash Only” on the piece of paper. There is a sign on the machine that reads, “No Cards. Cash Only” and a woman with a full cart pushes over to it. One of the cartherds comes over, and loudly enough for me to hear her says, “This machine is cash only.” But the woman ignores her. I get a scanner as I move up.

These are new machines. None of them will tell you to please wait because there is an unexpected item in the bagging area. If I ever win the lottery I will buy one of the old machines and when it locks up because of the unexpected item I’m going to open up with a Browning Automatic Rifle and put holes into it until I run out of ammo, and I am going to have a lot of ammo.

“What the hell is wrong with this damn thing?” Yes, the woman at the cash only machine is yelling. Yelling. She has no cash. She has taken the piece of paper off the card reader and is trying to put a credit card in it. The woman begins to throw a fit. “I ain’t got time for this shit” she yells repeatedly as she exits the store, all her stuff still at the scanner. The cartherds don’t so much as bat an eye at this. By far, the type of behavior they’ve just witnessed, is mild. Think about that. Think of where you have to be before this sort of thing is totally normal.

I have shopped not late enough. I have entered the realm of the people who are directionless, without intent, and they are purposeless. This is a foreign country to me. This is not my land. These are not my people. I wonder where the screaming child is, and I wonder how many of the people I’ve interacted with today were raised just like the screaming child; left to make noise regardless of how it affects others, with uncaring parents who might have been raised the same way.

2 thoughts on “Not Nearly Late Enough”