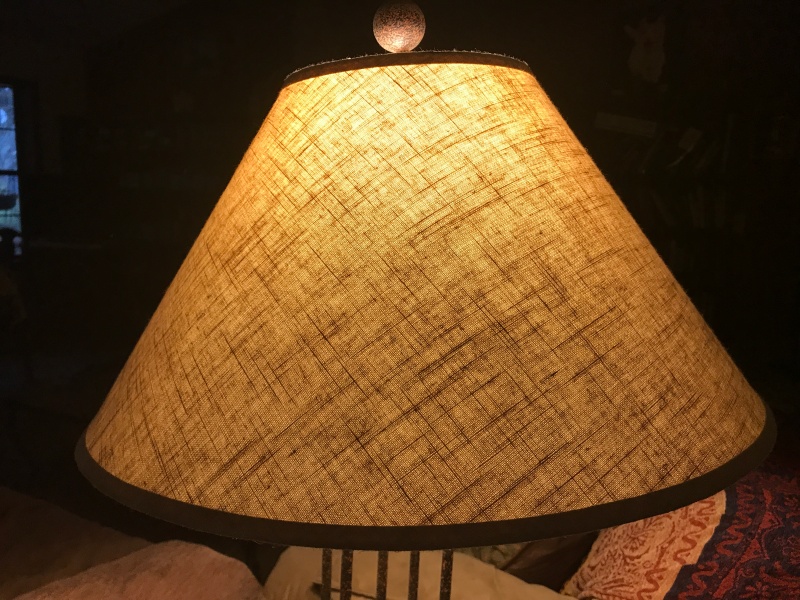 While trying to change perhaps the last incandescent bulb out of a lamp, I put my thumb through the lampshade. I bought this lamp back in 1996, when I bought my first house. New furniture, that was a must, people told me, and admittedly, the new furniture looked nice back then, and it has aged well, but now it’s all old and stained, and fragile. I didn’t foresee ever needing a lampshade, but the lamp itself is still good.

The thrift is run by a religious cult. They get people to donate stuff, sell it, and claim to save souls, and some of the people who work there seem programed. But it’s early in the morning and as far as I can tell, I’m alone in the giant warehouse. It is huge, and relatively sorted. The lamps are right there in front, a suitable replacement is found easily, and my journey ought to continue. I have shit to do. Odd phrase that, actually, but really. Instead, I wander.

An Italian looking cast iron statue draws my attention. It’s a woman wearing a low cut dress and she’s holding what appears to be grapes in either hand. Where did this come from and who made it? I shall not engage these people in conversation, no. A piano with a sign that reads, “Sold only to a Christian home” and I knew a man named Chester Christian years ago, and I wonder if he needs a piano.

Dozens of headboards, footboards, bedside tables, but no used mattresses, thankfully, that would be a little weird. There’s cheap new ones, still wrapped in plastic, “guaranteed new.”  I wonder how they cover that warranty? If someone gets bedbugs do they give them their money back?

I wonder how many of these beds were points of conception for someone. Years ago I bought an old mattress to keep on the back porch for the dogs when I was at work, and when I told the woman at the yard sale what I was going to do with it, she balked. She had conceived her children on that mattress, and her husband had to talk her into selling it. The dogs destroyed it in a day or two.

Racks and racks of clothes, like snake skins shed on hangers, the clothes of mothers, fathers, grandparents, taken out to the retirement home for old clothing, left to go to bed with the dishes and spoons, the cups and glasses.

Can you imagine what it must be like, late at night, when the beds, and clothes, and the silverware start to talk? The beds have the sex stories, the flatware are the foodies, but I think the knickknacks, the dust collectors, and those items that were whimsical are those with the best tales to tell. Oh, and how sad now, for some mantlepiece vase, passed down by five generations, finds herself rubbing elbows with a plastic plant from Wal-Mart, cast aside for free.

The ceiling fan, installed in the bedroom knew about the affair, knew the marriage was doomed, but never knew the wife would get rid of everything, even the fan, to start over again. There’s the rug who was bought rolled up, never used, and is still brand new, but so ugly no one wants it, and there’s the mismatched glasses, who have been together since the 1940’s who know that one day they will part forever. An animated movie about the items in a second hand store who share their stories, and at the end, a fire breaks out and burns the place to the ground, with only the iron statue remaining. The sole survivor now holds all the stories within her.

“How much for the lamp shade,” I ask.

“How much will you give me for it?” The man asks.

“I’m hoping you’ll name a reasonable price and we’ll meet in the middle,” I tell him.

“I have four bucks in my pocket.”

“Okay, four bucks it is then,” the man smiles.

“Got change for a ten?” I say and he stops smiling. We agree on five bucks for the lamp shade.

This is a text widget, which allows you to add text or HTML to your sidebar. You can use them to display text, links, images, HTML, or a combination of these. Edit them in the Widget section of the Customizer.
Loading Comments...