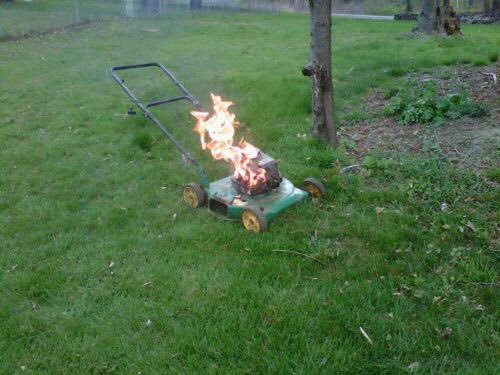 In my defense, I did try to pull the old tree down a couple of times but it refused to yield. Chainsawing a derelict tree is iffy, even to professionals, because rotted trees fall in odd ways and in odd places. Yet, still, when it crashed into the front part of my shed I wished I had done more and even as I had the thought I should have done more, I went into full procrastination mode, and did nothing about the stuff in the shed. My reasoning was sound; the front end of the shed was wrecked, but the roof was still relatively intact, and the stuff inside was still dry. It was cold at the time, and I didn’t need the mower or the hand tools, or for that matter, the chainsaw at that point in time, so I just left it. Until I got another shed I would just leave it like it was.

Then I started night work, and that drained my energy down to nothing, and I knew I would have to mow, one day, and I knew the longer I let it go the worse it was going to get, but night work, exhaustion, and dread got the best of me. I decided to go into the shed today, and get the stuff out I could, put it on the porch if I had to, and mow the grass. It was time. I was looking to see where Lilith was earlier in the day and lost her in the backyard.

First, there was still part of the tree on the shed. I got the axe out and started chopping and Budlore Amadeus began barking at me. Every time I hit the tree with the axe, it made a deep resounding boom from inside the shed, like Grond was hammering away at it. This made for interesting tree removal, true, but it was a little funny. Once the tree was removed, I hard to unbend the shed as best I could, and say what you will about cheap metal sheds, but cheap metal is easy to bend. I got lucky; my metal rake was wrecked and the handle on the mower was a little misshaped, but all in all, most of the stuff was okay. Now, would the mower run? Yes, indeed, it would and it did. I was in business, except the grass was forest tall, and it was hot as hell. And I had been using an axe for the better part of an hour.

It was already one in the afternoon when I wrestled the mower into the front yard. I’m a push mower guy, yeah, really, because I don’t like the idea of being as out of shape as I am and paying five hundred bucks, or three times that much, or more, to sit and mow. Sure, this thing has gotten out of hand, certainly it’s going to be a bitch, but it’s going to be one hell of a workout. I decide to push, pull, and finesse this thing until I run out of gas, in the mower, and then take a thirty minute break. Usually, a tank of gas will nearly do the front and back yard, and I can get both done in two hours if I hurry, three if I do all the detail spots.

One hour later, I have an area mowed the size of my first apartment, minus the living room and kitchen. True enough, it’s the thickest and hardest part of the front yard, but I’m making zero progress at this point. Push, pull back, lift up, push, lift up quick as the mower nearly stalls, and the gnats are just about to carry me off like the Flying Monkeys in the Wizard of Oz. The tank runs dry shortly afterwards, and damn, this is going very slowly.

The first break I feel okay, but I can tell that my legs and back are getting a workout. I’ve got a good strategy in going slow, sectioning off the yard, cutting less than half the width of the mower, moving back and forth through the roughest part, and truly, I haven’t had to mower quit but once or twice. It’s slow, damnably slow, but I knew it would be.

Two hours later and I’ve got about half of the front yard done, with a patch that I’m going to have to attack with a weed eater to start it. There’s a pine tree there and there’s a billion cones, broken branches and a lot of debris. Fine. I expected that also. What I didn’t expect is to be two hours deep into this thing with just this to show for it. True, the thickest and hardest is done, but barely, and my body is beginning to protest. Still, after two hours, I still feel okay. During my break I take two aspirins and drink a lot of water. I may very well have two more hours to go just in the front yard. It’s not impossible, and I am running out of hours in the day.

Push, pull, lift, wait, and the grass is being cut and the hours are going by. My first real job was in the fields so there’s really nothing I will ever do that compares to that at all. This is bad, but it’s on my own terms. My back and legs are beginning to ache, however, and I can feel over half a decade of life hanging off of me. My making progress and can tell it down, driving deeply into the yard, narrowing the uncut area, and I wonder when we Americas lost the ability to appreciate hard work. There was a time everyone worked hard at something and now it seems nearly no one does. People don’t force their kids to take Summer job in the fields anymore, and you never see a kid pushing a mower. I’m sweating and it’s pouring off of my body, but it does feel good, this does. I can feel my body’s strength out here in the heat and the dust, and the tall grass, and it is a good thing. Do kids understand this feeling these days? Have they ever been pushed to the point where the work seemed endless, the days never-ending, and pay laughably low?

Three hours, and there’s a thin strip left. I have to refuel and take a break. It’s after five and I think I can knock this out before sunset. About ten minutes into the break the thunder kicks in and I go outside to make sure I can get the mower on the porch in case of rain. As I am pushing it the rain begins, hard, unrelenting, and incredibly cool. I’ve had more than my share of outside jobs where a rain like this was a benison. It feels good to be drenched to the bone, all the clothing wet, all the sweat swept away, and now, the day is done because of the rain. Put the tools away, go inside, and strip down in front of the washer, and then take a shower.

The day is done, even if there is still grass to mow. It doesn’t matter because I knew this would happen and it would be this way. I will likely sleep better much later on in the night, and feel good when I awake.

5 thoughts on “I Fought the Lawn and the Lawn Won.”